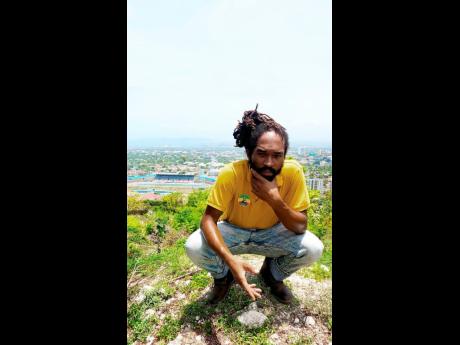 Steelie Supreme is absolutely for chopping, but only vegetables.

The up-and-coming artiste is challenging the current lyrical climate of songs glorifying scamming, culturally coined as 'chopping/banging the line', with his anti-scamming single, Chop (Vegetable).

Released last month, the track encourages those tempted to pursue the fast lane to choose more honest ways of making a living. Steelie Supreme also declares Haile Selassie as the only guard ring he needs in light of another topic that has been permeating dancehall lyrics lately.

"I was inspired to make this motivational song in the wake of this current lottery scamming 'pandemic' in Jamaica," he said. "It is absolutely sad and disappointing that vulnerable populations, such as the elderly, have experienced so much depression and distress at the hands of local scammers who continue to wreak havoc in milking the hard-earned life savings of these people. Also sad is that many of these youths are seemingly scamming out of desperation, laziness, lack of ambition, and maybe even lack of opportunities. Still yet, this is no excuse to scam or commit any other criminal activity."

He then imagined how such activities would affect his family which triggered the self-produced song.

Steelie Supreme is pleased with the feedback so far and hopes the track will become the anthem for national and international anti-scamming initiatives.

"The nowadays, vulnerable youths are really lost, chasing vanity and material things. In fact, the follow-up song titled Materialistic speaks to this exact thing. Now, I don't want people to get it misconstrued; it is good to have nice things and buy nice things for loved ones, only if you're living within your means. The issue that accompanies materialism tends to arise when people become desperate for things leading to crime that allow them to fake a certain lifestyle and live above their means to impress others who likely do not really even care."

Chop is part of his newly released Stepping Razor mixtape which provides social and political commentary across 20 tracks, including Warn Dem, God, Gunshot and Kutchie.

He also said there are a few feel-good songs.

Given name Blair Steele, Steelie Supreme described his affinity for music as innate considering his mother formed part of the operations for Reggae Sunsplash for more than 15 years. Initially aspiring to be a songwriter, he found himself more preoccupied with academia which led him to earning a Master of Science degree in medical microbiology from The University of the West Indies, Mona, in 2019. He rediscovered the "therapeutic potential of music" during the early stages of the pandemic, which he wants those who listen to his music to experience.