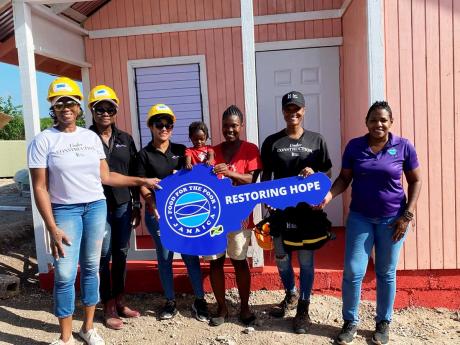 Wilson is one of the three recipients in this year's BossMom Network and Food For The Poor partnership under which houses are built for needy mothers. She said she never thought this day would come."The joy inna mi heart just a overwhelm, just a flow like a river. Thanks be to God. That's why I am not looking back," she said. With Mother's Day coming this Sunday, and with her birthday being in early June, Wilson said the new home is two gifts all rolled into one. Last October, Wilson's story was highlighted in THE STAR as she shared her challenges living in a rundown shack and trying to take care of her children, ages 19, 16, 13, eight and one. Her 54-year-old spouse, Owen Brown, was unable to assist as he had been diagnosed with arthritis in both shoulders, while she struggled with back problems which prevents her from doing labour-intensive work.

Wilson said that her children have been singing and shouting for joy as they settle in the two-bedroom house, which has a kitchen, bathroom and a verandah. Her joy was multiplied when the team of sponsors turned up with a refrigerator, chest of drawers and a dresser.

"Mi never stop pray. Mi give God thanks, and a thank everybody who came on board to make it happen. I thank THE STAR for highlighting my story," she gushed.

She also extended gratitude as, she said, the children got well-needed shoes and clothes. Wilson's joy can only be topped by just one more thing -- a television for her children to watch.

Now that she has got the breakthrough she was so desperately seeking, Wilson is reaching out to mothers who are still awaiting theirs.

"Just like myself, continue to press on. God is going to open a way, just like how He opened a way for me. Continue praying to God, continue do a little selling, ... find something to do until you get help," she said.