Furniture maker bemoans youths lack of interest in the trade 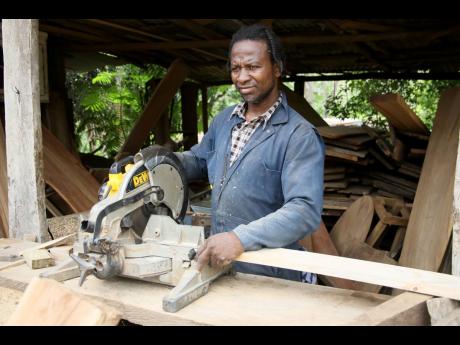 Herbert Williams, a cabinetmaker of Goshen in Mocho, Clarendon.

Herbert Williams has been making furniture since he was 15 years old and said that his decision to learn cabinetmaking more than three decades ago was one of the best he has ever made.

Williams, who operates Mop Head One Stop in his home town of Goshen, Mocho, Clarendon, said that he is worried for the future of furniture making as young people are not interested in it.

"Many gravitate towards construction or something else, or scamming or something, so it's just me right now with some ladies assisting me part-time," Williams, 47, told THE WEEKEND STAR.

Hapoline Ford, one of the women who assist Williams in his furniture shop, said that the trade is not attracting young people.

"It takes too long for the money to come, that's what they told me. When you go on the construction site, at the end of the week, you get your pay. However, this job, when you finish it, the person collects it and then you get your money. So they are not really into this job as they want fast money," Ford said.

Meanwhile, Williams shared that his fascination with the craft led him to seek apprenticeship in a workshop in May Pen, the parish capital, more than 30 years ago. His next step was to purchase tools after which he began his furniture-making business.

Fast-forward to 2022, Williams has imprinted his stamp on the sector as he is widely regarded in his community as a skilled craftsman. He told THE WEEKEND STAR that he doesn't see himself ever doing anything else.

"Mi nuh feel say mi can come out a it again to how much customers mi have right now, but a wish someone would take my place in the industry," he said.

Ford said that Williams' shoes will not be easily filled whenever he decides to hang up his tool bag.

"This is a dying art and Mr Williams is a good tradesman because he doesn't do crash programme jobs," she said. "He does jobs that you order and he is an antique builder. He does his own designs. He carves for himself, [he is a] very good sander. He can make from a pin to an anchor in the woodwork trade."