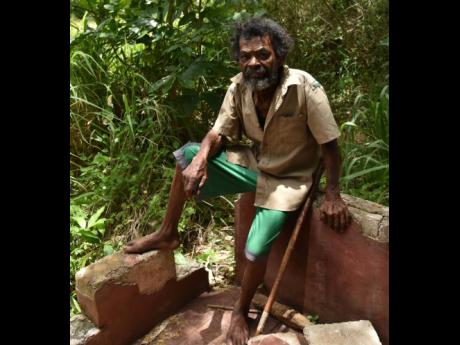 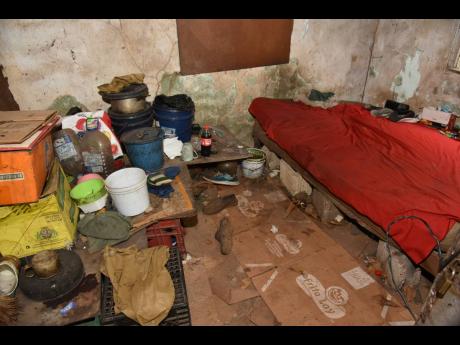 Salmon pays $1000 a month to rent this small space. 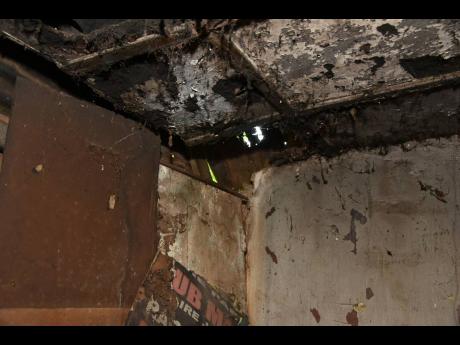 The ceiling of the dwelling is in need of repair.
1
2
3

It doesn't take a lot to make Henry Salmon of Exton in Ballards, St Elizabeth, happy.

All he needs is some food and a good place to lay his head, and he will be content. But the 76-year-old senior, who lives in a one-bedroom, unkempt shack, has seen better days.

The interior is dirty and various items are strewn about the dwelling. Despite that, Salmon pays $1,000 per month for rent. His working days behind him, he hobbles along with his walking stick into Junction Square, where he begs, depending on the mercy of others so he can make his monthly payment. As he shared his tales of woe with the news team, he explained that he was more spritely in his younger days.

"I used to work on truck [that] go a town carry market people. And a work for 21 years with the truck company as a side man pon di truck, a pack truck and something," he shared. Salmon said he left that job and was working with 'a girl' for five years when his foot started acting up.

"Mi feel the foot a pain me and mi haffi leave the work and go doctor. Dem say a arthritis. The arthritis a kill me. Mi caan walk more or suh. If I don't have a stick, I can't walk into the house," he moaned. He said that he has been living in that condition for the past five years, as his fortune has gone downhill. He was living rent free in a house, but the owner sold it. He then got to 'kotch' in a little shop in Junction, but that didn't work out for long. Salmon said he met the owner of the room he currently occupies and asked if he could rent him somewhere to sleep.

Salmon said that he has a daughter, who lives and works in Hatfield and who visits the community most Saturdays. She gives him $500 and a few food items before visiting her three children.

Hamlet Stone, vice-president of the Junction Development Area Committee, who introduced the team to Salmon, said they have been trying to assist him and others.

"This is basically the start of it right now. We gonna work with him from now on. As you can see, him badly need help," he said, even as he admitted that the organisation can only do so much.

Salmon said he is not afraid of the future, even though he has no idea if life will get better for him.

"A can't sey 'yes' and a can't sey 'no' if life will get better. But I believe in the good Lord above," he said. Jean Lowrie Chin, founder and executive chairperson of the Caribbean Community of Retired Persons, a non-profit organisation for persons age 50 and over, is pushing for the authorities to create the legislation that will ensure the care and protection of the elderly.

"There is similar legislation in other Commonwealth countries, which we have recommended to the Ministry of Labour and Social Security that they can use to model our legislation," she said, adding that there also needs to be a collaborative effort to protect the elderly. She noted that that can be done right away between families, communities, the Church, Government and civil society.