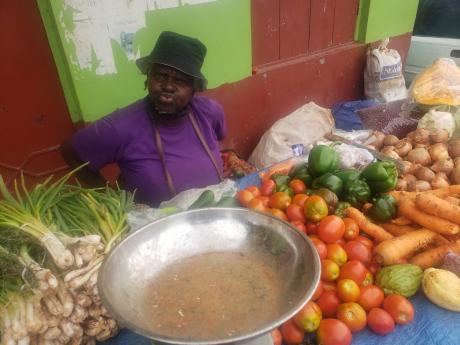 Hyacinth Kerr, a vendor in the Clark’s Town Market.

Vendors at the newly upgraded Clark's Town Market in Trelawny, while thankful for the improvements made to the space, are calling on the authorities to deal with a drainage problem with which they are now faced.

"I appreciate the effort to improve on what existed. In former times, most of the market was in open space. Now, most is covered," said Ava Stephens, who has been operating in the market for more than 10 years.

The veteran vendor, however, has a major concern.

"When they worked on the market, they did not think about drainage. When it rains, the water settles and does not run off," Stephens said.

Hyacinth Kerr, another vendor, said that the drainage problem is a major one and has urged authorities to have it fixed quickly.

"Mr [Desmond] McKenzie opened the market on Thursday, and on Saturday you could swim in the market," Kerr stated.

McKenzie, the minister of local government and rural development, reopened the market during a ceremony on June 16. The shop spaces are to be rented or leased to individual businesses.

The five-shop facility, which also includes bathrooms and shower areas, was constructed at a cost of $14 million and was spearheaded by the Trelawny Municipal Corporation through funding from the Ministry of Local Government and Rural Development.

The initiative formed part of a multi-phase redevelopment project of the Clark's Town Market and Transportation Centre, which shares the same grounds.

Susan Thorpe, who operates a bar at the facility, said that her main concern is the size of the space.

"It is $500 for the little space. They could have made it bigger and charge us more, but it's an improvement from where we are coming. Now, we can lock up our stock," she said.