Businessman before court for knock-off goods 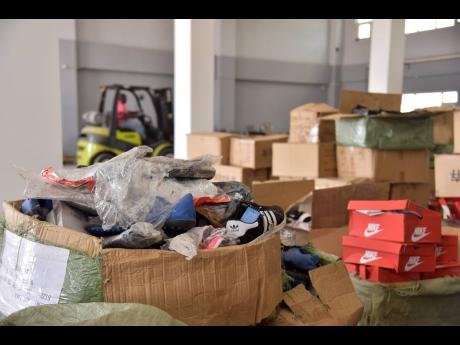 A Chinese businessman who was allegedly found to be in possession of large quantities of pairs of counterfeit sneakers and clothes, along with more than 200 bottles of transmission fuel, made his first appearance in the Kingston and St Andrew Parish Court yesterday.

Yitong Chen is charged with seven counts of unauthorised use of trademark and deceptive and misleading conduct, contrary to the Trademark and Consumer Protection Acts.

The court heard that on June 8, members from the Counter-Terrorism and Organised Crime Branch carried out an operation at Princess Street, downtown Kingston, where Chen operates a store. A search was done of the premises where the goods, which are said to be counterfeit products, were found.

The accused is represented by attorney-at-law Able-Don Foote, who did not provide a plea on behalf of his client. However, the lawyer requested disclosure to facilitate further discussions with Chen. The prosecutors also requested an adjournment in the matter to obtain statements from the brand-holders.

Parish judge Maxine Dennis-McPherson granted the request and set the matter to be mentioned on September 22.