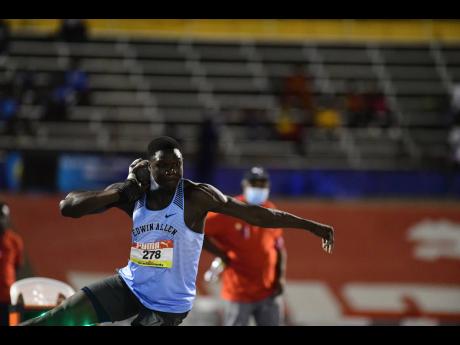 Edwin Allen’s Christopher Young in action during the Class One Boys Shot Put final at the ISSA/GraceKennedy Boys and Girls’ Athletics Championships at the National Stadium on Saturday. 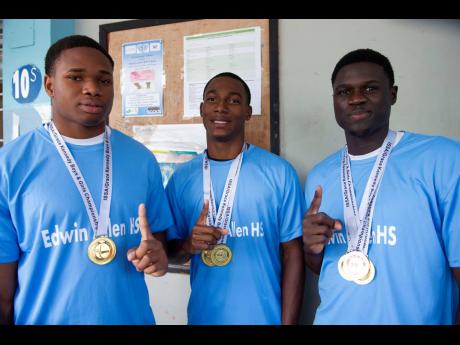 Having amassed 24 points for his school, Edwin Allen High School's Christopher Young was the overall Boys champion at the ISSA/GraceKennedy Boys and Girls' Athletics Championships at the National Stadium last week.

Young, 18, secured gold in the Boys Open Javelin and Class One Shot Put, and a bronze in the Class One Discus. He confessed that he knew he was good but his coming out on top was the icing on the cake.

And to think that had it not been for a female athlete on the track team that caught his eye, he might have still been playing football.

With a smile he shared the story with STAR Sports, as he confessed that he has her to thank for luring him to be a part of the track and field team.

"It's a very funny story," Young shared. "One evening, I went to football training and I looked over the throws section and saw a girl and I said to myself, 'Yes!', and that's how I started throwing."

That girl, whose name he did not reveal, moved on to an overseas university last year and they still keep in touch.

His dream is still very much alive as Young said he is set on racking up more successes in the disciplines, and he will have his chances this weekend at the Carifta Games at the National Stadium, later this month at the Penn Relays in Pennsylvania, and at the World Athletics Under-20 Championships in Cali, Colombia, in August.

Young, who is not short on confidence said his coach and his "number one motivator," his mother, ensure he keeps a focused head.

Revelling in his champion boy status, he said it feels good and a reward for the hard road he took to get there.

"When I started out, I didn't really start with track and field, I started as a footballer," Young shared acknowledging the catching up he had to do and the hard training it took.

"All season, I have been doing exceptionally well in all three of my events. During track and field season, my mother has been motivating me, and my family told me I shouldn't listen to people and I should always keep my head up. That's what I did."

Young now hopes to follow in the footsteps of Olympians Fedrick Dacres, Traves Smikle, and Chad Wright by becoming a professional thrower.